The actions of Kenilworth residents have demonstrated how being vigilant and acting quickly, appropriately and safely can make a real difference to deterring and detecting crime. It is believed that vigilance by a Kenilworth resident who witnessed suspicious behaviour and immediately dialled 999 combined with prompt attendance by Warwickshire Police and assistance by members of public led to arrest of three males on Tuesday 12 March 2019.

“We continually stress that it’s by people being vigilant that the community stands the best chance in fighting and ultimately deterring crime in our area. The events yesterday in the western area of Kenilworth prove beyond doubt that vigilance by the community in support of the police is a central element to the success in fighting crime.

With members of Kenilworth’s Safer Neighbourhood Team together with response officers, the police dog unit and the police helicopter responding a excellent result was achieved and shows that police patrols and presence across the town is in place and can make a real difference when supported by vigilance from the community” the spokesperson added.

Warwickshire Police issued the following statement at 16.45hrs on 13 March 2019:

On Tuesday 12 March Police were called to a reported burglary to a property in Kenilworth.

Police Officers from Kenilworth’s Safer Neighbourhood Team, Leamington, the Operational Policing Unit,  Dog section and plain clothes officers all attended the scene, and with assistance from the general public, three males were apprehended nearby and arrested.

Warwickshire Police would like to thank the members of public in Kenilworth, who through their vigilance and actions, enabled the arrest of these suspects immediately at the scene.

People in the area have commented on several social media sites and from piecing together what was witnessed it appears this is what happened:

A white Audi motor vehicle was spotted at John O Gaunt Road, Kenilworth acting suspiciously and a nearby property was burgled.

The white Audi motor vehicle was rammed by a police vehicle that arrived on the scene quickly but the Audi made off. The vehicle was pursued. The vehicle appears to have been subsequently stopped and the driver was arrested (see below).

Three suspects made off on foot from the area of John O’ Gaunt Road and were chased by police units. A member of the public was seen to detain one suspect near Clinton School, Caesar Road with police arriving quickly to take over. Two other suspects were chased further by police officers which involved the dog unit and the police helicopter was seen above.

If you witnessed anything you think may be linked to the incident then please contact Warwickshire Police on 101.

The picture and narrative below was posted by Warwickshire Police Operational Policing Unit on their Facebook feed late yesterday: 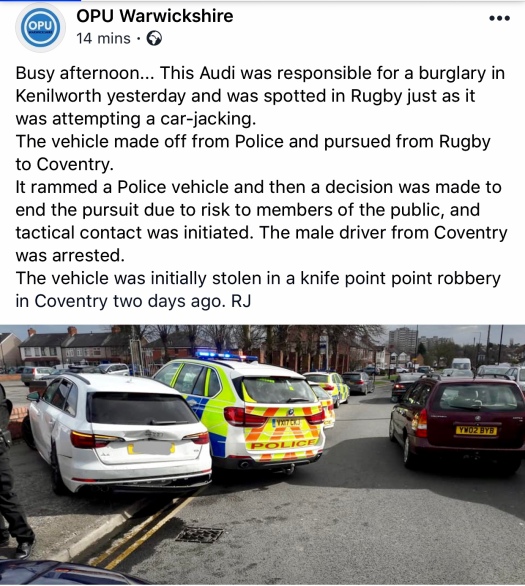